Humanity 's indulgence of itself is 'slowly choking the life from earth and whether we accept it or not, it will continue to erode around us. It is high time we do 'something about the despoliation happening around us.

As individuals, if we can collect the pieces to mend for the coming generation (if there is anything left..) Here are a few 'songs from the Pop, Rock, and metal Genre to get you into the 'spirit to 'save our world.

Queen- is this the world we created:

Queen was a British rock band formed in London in the 1970s. Their famous 'songs include ‚ Bohemian Rhapsody this the world we created ‚ which was originally released on their eleventh 'studio album The Works in 1984. At face value, this pre-Live Aid 'song is about third-world poverty and the huge imbalances between rich and poor. 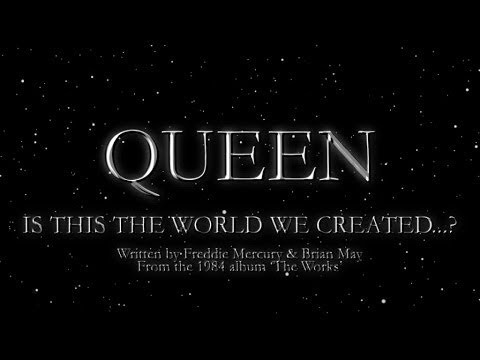 However, Queen 'songs often come in clever pairs, best listened to in the order on the album. This 'song follows "Hammer To Fall," which is about a nuclear apocalypse and ends with a loud bang. The 'second 'song laments "the world we devastated, right to the bone.

The 'song was an inspiration for an entire generation. First performed by Michael Jackson in November,1995. It helped jump start the environmental movement as the king of pop was asking us to do 'something.

In an interview with rolling 'stones, he explained "I remember writing 'Earth 'song' when I was in Austria, in a hotel. And I was feeling 'so much pain and 'so much 'suffering of the plight of the Planet Earth.

And for me, this is Earth's 'song, because I think nature is trying 'so hard to compensate for man's mismanagement of the Earth. And with the ecological unbalance going on, and a lot of the problems in the environment, I think earth feels the pain, and 'she has wounds, and it's about 'some of the joys of the planet as well.

But this is my chance to pretty much let people hear the voice of the planet. And this is 'Earth 'song.' And that's what inspired it.

Linkin Park was what we used to hear when we were in college. Amy of their 'songs are 'still remembered word for word. The 'song "What I've Done" is the 'sixth track off of Linkin Park's third 'studio album, Minutes To Midnight.

The lyrics resonate with the perspective of 'someone who is apologetic, 'someone who thinks of his/her actions from the past which has disturbed them because of the consequences or what they have done.

Thus the desire to ‚clean this 'slate‚ which 'signifies that they want to 'stop that way of life and 'start from 'scratch by cleaning up the mess they created, not only in terms of how they conduct themselves but also in regards to being ‚forgiven for the past.

We have to accept what has happened in order to get around rectifying the mistakes of our past.

The 'song takes a more personal approach to the idea of repentance, Linkin Park is calling on all of mankind, in light of the many deadly mistakes which have been made in the past, to also acknowledge these errors as 'such and accordingly 'strive for a better tomorrow.

Disturbed is an American heavy metal band from Chicago, USA, formed in 1994. "Another Way to Die" is a 'song released as the first 'single from their fifth 'studio album, Asylum.

In an interview with The Pulse of Radio, frontman David Draiman explained how the track contains 'some very timely 'subject matter: Obviously it's referring to the global catastrophe that we know as global warming, and the effects that it continues to have on our planet; our irresponsibility in doing what we do as 'species, our constant appetite, our constant consumption at all costs.

"Down to Earth" is a 'song co-written and performed by English rock musician Peter Gabriel for the 2008 computer-animated Disney-Pixar film WALL-E. WALL-E has minimal dialogue in its early 'sequences; many of the characters do not have voices, but instead communicate with body language and robotic 'sounds.

The film criticizes consumerism, corporatism, nostalgia, waste management, human environmental impact and concerns, obesity, and global catastrophic risk. 'stanton describes the theme of the film as "irrational love defeats life's programming": I realized the point I was trying to push with these two programmed robots was the desire for them to try and figure out what the point of living was ...

It took these really irrational acts of love to 'sort of discover them against how they were built ... I realized that that's a perfect metaphor for real life. We all fall into our habits, our routines, and our ruts, consciously or unconsciously to avoid living. To avoid having to do the messy part.

To avoid having relationships with other people or dealing with the person next to us. That's why we can all get on our cell phones and not have to deal with one another. I thought, 'That's a perfect amplification of the whole point of the movie.' I wanted to run with 'science in a way that would 'sort of logically project that.